A little bit of History....

Soulfusionseven are a collection of musicians originally founded by John Saltwell and Paul Baker to create a live act due to demand following the success of the single Summer Breeze written by John with singer Cheryl Aldridge. The song climbed to number 1 in the official UK soul chart in the summer of 2017 featuring the vocals of Amelia Melody.

It all began in late 2014 when after many years two old friends reunited. John Saltwell is a professional bass player/songwriter from the age of 9 and has been lucky enough to have worked with such artists as Barry White, Carlos Santana, Paul Weller and Simply Red and many more and Soulfusionseven's manager/promotor and producer Paul Baker decided to collaborate on a song that Paul had asked John to write for him with some lyrics he provided, after a few weeks Steppin' up my love was born, using musicians John had worked with over the years and some fresh new talent. Local Hertfordshire singer Dave Goodridge provided a stunning vocal,  Mark Whaymand played a great Sax solo that John believes helped the song get to where it did and with the help of Paul’s contacts the song climbed to number 1 in the Amazon Nu Soul chart and remained there for 8 weeks.

Following this success John and Paul returned to John's Cottage Studio to write more music and currently have a collection of songs they are very proud of and that takes you back to their late 70's early 80's roots.

They followed their success with the next single, that was a tribute to the late great Luther Vandross entitled 'Luther'. it created the perfect mood as a follow up single.

In early 2016 'Steppin' up my love' was remixed by a young Japanese producer called Yuki Tashahaki under the pseudonym 'T Groove' and it climbed to number 1 in Japan, number 1 in various other charts and number 6 in the official UK Soul Chart.

In the summer of 2017 they reached number 1in the Official UK Soul chart with their next release 'Summer Breeze' released on DSG records.

In 2018 the band were busy working on new material and concentrating on songs for their first album 'Acquittal of the Ego' due for release around May of 2019.

Various singles followed all reaching top 10 positions in the UK Soul chart and putting Soulfusionseven firmly on the map They released their last single on the 15th February 2019 called 'Slide the remix’  featuring the amazing Carol Black on vocals and Brooklyn based producer Andre Watson aka Big Dre which at the time received a lot of radio airplay and had great feedback.

The band went into rehearsals for live shows in 2020 and following a few member changes did a few low key local shows to gauge audience feedback and it was a huge success for the band, Paul started booking shows to start around late March 2020 then COVID hit and the live shows were all cancelled.

Disappointed and locked down for over 2 months John decided to hit the studio and start writing, co/writing and recording some new material, 22 in fact, recording with the new band members Richard Hollman(guitar), Max (drums), Andy Kennedy (keys), Tom (percussion) and Jaro Kulha (saxophone) remotely John has come up with a fresh new sound for the band and with amazing vocal performances from Dave Goodridge, Amelia Melody, Cheryl Aldridge and Gavin Skeggs, from the beginning John was consulting with Paul throughout the whole process and now Soulfusionseven are very excited to release not only a new single but an Album entitled ‘Balance’.

“I won’t lie if I say I think there are some standout track’s written by myself and Richard Hollman and featuring Singer/ Songwriter Dave Goodridge on vocals and some equally great tracks I wrote solely with Dave that we feel are worthy of success as cross over songs, Dave has really shone for me on these songs and it shows and Richard has proved to be a great song writing partner, Cheryl of course has worked with me for nearly 30 years and her writing and singing talent never fails to amaze me, as for Amelia her voice is beautiful and full of character and Gavin brings a fresh more edgy side to some of the songs which I absolutely love, his jazz feel is great, I’m blessed to have such creative people to work with and for Paul to be there when it all gets too much and for his production skills, thank you all” John.

Hi everyone so we’re about to come out of May and go into June and with a fresh and exciting new band with a line up I’m very proud to play along side and to certainly keep me on my toes, July will see new shows start coming in starting on the 15th July in St Neots at the Pig N Falcon pub and would love to see you all there, the following day see us recording and filming a set to a exclusive guest list of people who have helped us get our new record out, Paul has been busy filling up the calendar so watch  out for new events coming soon.

AND JOHN SALTWELL FOR PRINT

The Bands first Album was Released in 2019

"ACQUITTAL OF THE EGO"

Go to the music page to get your Physical or Download copy Now.

Some Reviews of our Single SLIDE

Hi Paul, I love the track its a winner. - Christopher Middleditch - Solar Radio

Just listening to new single. Wow. This has to be the best piece ever from Soulfusionseven apart from Luther. Well done lads. Loving this - Soul legends radio - David Brace (Dj Dabs)

Just listened to your new song Slide, its a winner got that funky soulful jazzy feel to it - Paul Nolson

Watch this space for forthcoming Events/Gigs

July 15th will see the first live show since lockdown at the Pig N Falcon in St. Neots with new members and a new energy;  this will be well worth travelling to, followed on the 16th by a invite only show at the Practice Roomz rehearsal studios in Stevenage old town which will be filmed and recorded live, anyone interested in coming along please contact us on our contact page.

Soulfusionseven finally introduces some glamour into its ranks, we would like to formally introduce the incredible talent that is Joannie Josephs, the powerhouse yet soulful voice of Lorraine Haley and soulful tones of Mr Dave Goodridge into the Soulfusionseven family to add some soulful sparkle to the already funky eclectic mix

Soulfusionseven have been blessed with a great talent to help elevate their sound with some amazing guitar playing and songwriting; ladies and gentlemen I have the pleasure of introducing to  you Mr Richard Hollman

2022 sees the band  currently mixing and mastering the new album ‘Balance’ with the excellent Martin Shaw and are excited about its release, but will probably release a single from the album first

The Band are due to Release their New Single " COSMIC GARDEN PARTY " on Friday 16th July 2021 on their own Label FUNK BROTHER RECORDS.

2020 sadly saw the bands tour cancelled due to Covid 19 and has been devastating for many in the business of music, performing and the Arts, we truly hope it gets back to some kind of normality in 2022, and look forward to seeing you all at our gigs somewhere along the road.

2020 Band are Rehearsing for forthcoming live Events/Gigs for 2022

New personnel brings new life to the band and we are excited about getting out with the new guys and girls and playing our new album to everyone, following what we can only describe as a terrible year for most musicians.

I'm from Brazil and knew about the band listening to Solar Radio and visiting the site 'firstexoeriencerecords', so yesterday I purchased your CD, very very good, amazing. Waiting for new album *Balance*, just listened to your new song *Universal Love* on your website. Great music hasn't died yet

Do you know what I love about you guys? You aren’t that typical cheesy funk/soul/band that seem to be two a penny.. yes I am biased!... your gig at the Flava Bar was authentic and real.
Cheers, and here's to a bright future for Soulfusionseven, please record a rehearsal like I suggested... if it’s good enough for Chic...  get my drift.. Ha ha ha
#soulfusionseven #johnsaltwell #paulbaker #DSG #uksoulchart

So, we have some very exciting news,  we have been in contact and working with a producer/ remixer from Brooklyn, New York by the name of Andre Watson aka Big Dre to work on some future music projects with us, following his fantastic remix of our current single Slide which will be available soon, we are also very busy working on the next single which we are very excited about and think will blow you away. 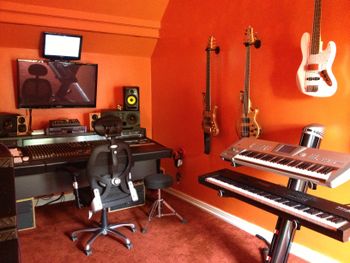